This blog was contributed by Yvonne Jacobs, Associate Director for Undergraduate Laws.

Virtually all medical treatments carry a risk. What is the legal position where a patient has medical treatment carried out with skill and care by a medical professional but ends up worse off due to an inherent risk in the treatment? These types of claims are known as informed consent claims and are brought in the tort of negligence. The claim is not that the medical professional was negligent in carrying out the treatment but that they were negligent in advising the patient about the risks. The patient argues that they would not have had the treatment if they had known about the risks and would not, therefore, have suffered the loss. In common with any negligence claim, all the elements of negligence must be satisfied. The two problematic elements in informed consent cases are breach of duty and causation. These elements have been addressed in a number of recent cases.

Until 2015 the courts applied a paternalistic approach to informed consent claims. In the case of Sidaway v Board of Governors of the Bethlem Royal Hospital [1985] the House of Lords applied the Bolam test. When advising the patient of risks did the doctor act in accordance with a practice accepted as proper by a responsible body of medical practitioners? If so, there was no breach of duty. Over the decades that have followed there has been an increasing focus on the rights of patients to make medical decisions for themselves. Patient autonomy was fully recognised by the Supreme Court in Montgomery v Lanarkshire Health Board [2015]. Doctors are now under a duty to take reasonable care to ensure that a patient is aware of any material risks involved in any recommended treatment, and of any reasonable alternative treatments. A risk will be material if a reasonable person in the patient’s position would have attached significance to the risk, or the doctor should reasonably have been aware that the particular patient would have attached significance to it.

Since Montgomery was decided the courts have given some further guidance on what is meant by a ‘material risk’ and what constitutes ‘reasonable alternative treatment’. In Duce v Worcestershire Acute Hospitals NHS Trust [2018] the risk was not considered to be material because it was not a well known risk at the time and a reasonable professional would not have been aware of it. In Bayley v George Eliot Hospital Trust [2017] the court found no breach in relation to failing to advise on reasonable alternative treatment because the alternative treatment was not widely known about or commonly accepted practice. In contrast to these cases which both failed on breach the Court of Appeal in Webster v Burton Hospitals NHS Foundation Trust [2017] did find a failure to advise on material risks. The claimant, who had a nursing degree, should have been told that her pregnancy had unusual features and told the implications of this for her baby in order to for her to make a informed decision about the birth. 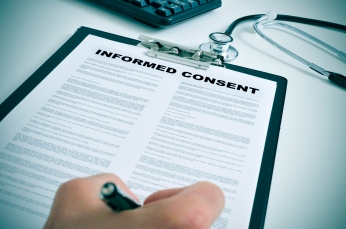 As with any negligence claim it is not sufficient to prove that the defendant breached their duty. The breach must be the factual and legal cause of the loss. There has been some uncertainty created by the judgment in Chester v Afshar [2004] in which the House of Lords seemed to depart from the but for test and the traditional rules of causation, for policy reasons, in an informed consent case. In this case the claimant argued not that she would not have had the operation at all if she had known about the risk but that she would have had the operation at a later date.
This case was relied on in subsequent cases to try to get around the difficulties in proving factual causation in informed consent cases. Examples are the recent cases of Diamond v Royal Devon & Exeter NHS Foundation Trust [2017]; Shaw v Kovac [2017] and Correia v University Hospital of North Staffordshire NHS [2017]. In these cases the claimant attempted to argue that Chester was authority for the principle that the but for test did not apply in informed consent cases and that claims could succeed on proof of breach of duty alone. This argument failed in all three cases with the courts deciding that no freestanding right to damages for infringement of the right to personal autonomy existed. This was confirmed by the Court of Appeal in Duce v Worcestershire Acute Hospitals NHS Trust [2018]. The court held that the modification to the but for test in Chester only applied in very specific limited situations ie where the claimant, if informed of the risk, would have postponed the operation to another date and the chance of the risk materialising would be very small. In all other situations the but for test should be applied and the claimant has the burden of proving this. In Duce the evidence clearly showed that the claimant would have gone ahead with the operation at the same time even with knowledge of the risks. The but for test could not be satisfied so causation failed.

Following on from these recent cases it is clear that in order to establish factual causation in informed consent cases the claimant must show that if told about the risk they would not have consented to the treatment (or at least would have postponed it to a later date). This is not going to be easy to prove. In Mrs A v East Kent Hospitals NHS Trust [2015] and Diamond v Royal Devon & Exeter NHS Foundation Trust [2017] the claims failed because the claimant could not establish factual causation using the but for test. In each case the claimant argued that they would not have consented to the treatment if they had known about the risks. The judges thought that their views were being influenced by hindsight and did not accept their views. In Diamond, Judge Freedman stated ‘It is..human nature for people to permit that which eventuated to influence their thinking on what they might have done if warned about a particular risk’. Legatt LJ in Duce addressed the issue of the difficulty that claimants have in informed consent cases in proving what they would have done had they known about the risks. He suggested that this would be an issue that that was ‘ripe for further consideration by the Supreme Court when the opportunity arises’.

Based on these recent cases on informed consent it is clear that while the test in Montgomery makes it easier for a claimant to succeed in establishing breach, it may be harder for them to establish factual causation following the restricted interpretation of Chester in Duce. The normal rules of factual causation for negligence apply. The claimant must establish that had they been told about the risks they would either:

This site uses Akismet to reduce spam. Learn how your comment data is processed.